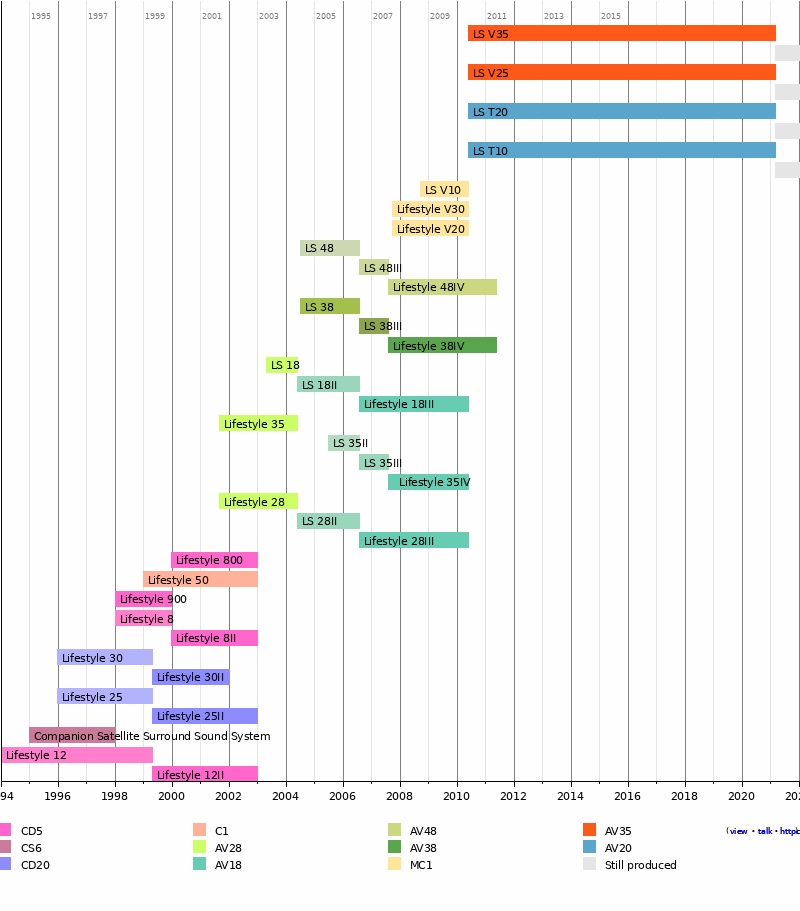 Starting in 1994, Bose released a wide variety of surround sound CD-based Lifestyle systems. Each system came with a music center that had the ability to play radio and CDs. Some systems came with a CD magazine that allowed it to store up to 6 CDs at a time. The music centers each came with a pair of analog RCA connectors. Surround sound models made after 1999 came with a digital coax connection.

The speakers used range from directional speakers, direct/reflect speakers, and jewel cubes, all requiring to be connected to a bass module.

VideoStage 5 is a technology Bose includes with all of its surround sound systems that converts any stereo or mono-source into surround sound.

In 1995, Bose released a sourceless surround sound system called the Bose Companion surround-sound system, which was designed to be used with a Direct Satellite System (DSS) or Primestar satellite TV receiver. This system marked a dramatic change from Bose's previous Lifestyle systems in that it was sourceless, had no expansion possibilities, and was Bose's first system to include video inputs. It featured multiple inputs, the "Built Invisible" speakers and VideoStage 5 encoding. While it won Popular Science's 1996 Best of What's New[2], it was discontinued by 1998.

The key feature of the system is the ADAPTiQ audio calibration system, which allows for the system to adapt to the owner's personal living room environment. The system plays tones through each speaker and listens with a microphone headset worn by the user, and based on what it "hears", the media center will calibrate and equalize each speaker to compensate for any acoustic abnormalities in the room. In this manner, any Lifestyle system will sound the same in any living room as the professional demonstration.

Starting with Series II DVD systems, Bose included a new standard for expansion called BoseLink, which allows the system to expand to 14 additional listening areas and can connect to any other Boselink device. There is also a wireless expansion option. Listeners use a radio frequency remote to communicate back to the main system, thus allowing it to control the volume and to select the audio source for that room.

The Lifestyle 38 and 48 systems have intelligent music storage capabilities. The 48 has the ability to store 340 hours of music, while the 38 can store 200. The uMusic technology is branded as an "intelligent playback system" because it ranks the music stored on the system by one's listing habits (similar to a TiVo). This is influenced by utilizing the +/- buttons on the remote, or just by skipping and listening to tracks stored on the system. uMusic also makes connections between different artists using built-in databases called Gracenote CD Database and AllMusic Guide, by mood, instrument, or artist collaborations. Through these steps it "learns" one's musical tastes quickly, and chooses music accordingly.[4]

An external video selector called the VS-1 was sold as an accessory for Series II or III DVD Lifestyle systems. It added three more video inputs (3 Component, S-Video and Composite) and either Component, S-Video or Composite out to the TV. This allows the system to up-convert video signals (composite to S-video, S-video to component) to deliver the highest quality signal a TV can accept. and simplifies switching to a "one-button" process.[5]

An external video selector called the VS-2 was included with series IV lifestyle DVD systems and sold after market for series II or III DVD lifestyle systems. It gives 3 video inputs (featuring 2 HDMI 1.2a & 3 Component, S-Video and Composite) and either HDMI 1.2a, Component, S-Video or Composite out to the TV. According to Bose with this device you can choose whatever input your external components support, connect it to the VS-2, and have the Lifestyle system switch both the audio and video by using your Lifestyle remote. It would also up-convert the lifestyle DVD player and any source up to 1080p if connected to a TV via HDMI.[6][7] The VS-2 has no audio return to the media center. So while it can accept full HDMI video it does not accept HDMI audio, requiring a separate audio cable (RCA, Fiber Optic or Digital Coax) from the 3rd party device to connect to the Lifestyles media center.[8]

V10, V20 & V30 - In 2007 Bose announced the creation of a new system called the Lifestyle V-Class using the MC1 media center.[9][10] Unlike its predecessors it comes without an internal CD/DVD player. When introduced there were two versions: the Lifestyle V30 and V20, and later V10 which released in October 2008. The main difference of the systems are the speakers that they come with. The V30 using the Jewel Cube speakers, the V20 using the Direct/Reflect speakers and the V10 using the Virtually Invisible cube speakers. Consumers may add any source component including HDMI-connected HD-DVD and Blu-ray Disc players.

All V-Class products are 5.1-channel systems featuring two HDMI 1.2a and four component, S-Video, and composite inputs; and one HDMI 1.2a, component, S-Video, and composite outputs. They are capable of up-converting video from any of the four connected S-Video, composite, and component-video sources to HDMI, and can upscale those sources to 1080p resolution. They come with five fiber optic and RCA audio inputs with two digital coax audio inputs, one being assignable. V-Class systems also have an AM/FM tuner, an RF universal remote, an external display, AdaptIQ, and Bose Link.

All four products are 5.1 channel systems with four HDMI 1.4a,[13][14] two component and three composite inputs. There is one HDMI 1.4a video output that scales input video up to 1080p output resolution. They support three non-HDMI audio inputs: optical, coax and RCA. The products support DTS, Dolby Digital, Dolby TrueHD, DTS-MA (core) and uncompressed multi-channel PCM (aka LPCM). They also feature a USB jack for firmware updates and to view pictures, and a BoseLink in.

The V35 and V25 models use the AV35 media center and feature an included iPod dock compatible with all iPods/iPhones (with the exception of the iPod Shuffle) two USB jacks & extra RCA inputs to support BoseLink expansion. The T20 and T10 use the AV20 media center and does not have the iPod Dock, excludes a radio, one USB jack and cannot expand.[11]

This system guides users through installation of any products connect to the system through an on-screen wizard. It uses a reverse lookup to recognize the remote of 3rd party products to program its own universal remote.

Boselink in allows one to connect to a Main Boselink Out system, either wired or wireless. Once connected to the main system listeners use a local radio frequency remote to communicate back to the main system thus allowing it to control the volume and to select the audio source for that room.

Retrieved from "https://bose.fandom.com/wiki/5.1_home_entertainment_systems?oldid=168"
Community content is available under CC-BY-SA unless otherwise noted.